Current Occupation and Country of Residence:
Actor working in both USA and England

Tell us your Faust Story!
I first started Faust way back on September 25th 1999, which coincidentally was when Faust itself had just started. I was part of Faust from when I was 7 years old until I was 18 years old. My first role was Augustus Gloop in Charlie and the Chocolate Factory and my final role was Rev. Parris in The Crucible. I also worked as a student leader from 2008 onwards and helped out with the summer courses until 2011.

What is your earliest Faust memory?
My earliest Faust memory is from that first production of Charlie and the Chocolate Factory or as I viewed it, The Augustus Gloop Show, I remember valiantly trying to upstage everyone and milking my fall into the chocolate river for all it was worth, as well as discovering that actually I quite liked all this attention and that perhaps I would continue with all this acting malarkey.

What is your favorite Faust memory?
That’s a tough one, I actually have to say that nothing has ever beat the sensation of being hoisted into the air wearing a full body dog costume and flying to Neverland every night.

What was your biggest challenge in participating and leading in drama workshops and productions?
The first one was getting the confidence to do things like going onstage and putting yourself out there, I think this was a huge challenge to begin with. My biggest challenge after that though was heading in the other direction, learning not to upstage people and to let others have opportunities and space to do their own thing. Basic humility essentially was what I lacked and had to discover for myself.

What did you gain from your experience at Faust as a student and as a Leader?
I really can’t answer that satisfactorily because Faust has been a part of my world for so long that I have very little sense of who I was/am without Faust. It gave me confidence, it gave me some of my best friends, it gave me responsibility, it gave me skills, and it gave me my vocation. Most of my fondest childhood memories happened at Faust. I think I can say with confidence that if I hadn’t gone to Faust that September in 1999 I would be unrecognizable from the person that I am today.

How did studying Drama and Theatre impact your life?
It effectively took over my life. My choice of university was shaped by which ones had the best theatre programs and then at university I took part in over 20 shows over a 3-year period. I applied and got in to the Bristol Old Vic Theatre School and have just graduated with a Masters degree in Professional Acting.

What was the most valuable piece of advice you got from a director / leader at Faust?
What sticks out in my mind is learning to come up with your own ideas as an actor. You need to exercise your own creativity as an artist. The reason a play comes together is because everyone contributes creatively and helps to form a final product.

How would you describe Faust to someone new to drama and theatre?
The best way to get into the arts, but more than that, a great way to gain confidence, to make lifelong friends and discover your passion.

“It gave me confidence, it gave
me some of my best friends,
it gave me responsibility, it
gave me skills, and it gave me
my vocation.” 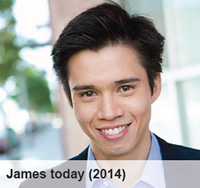